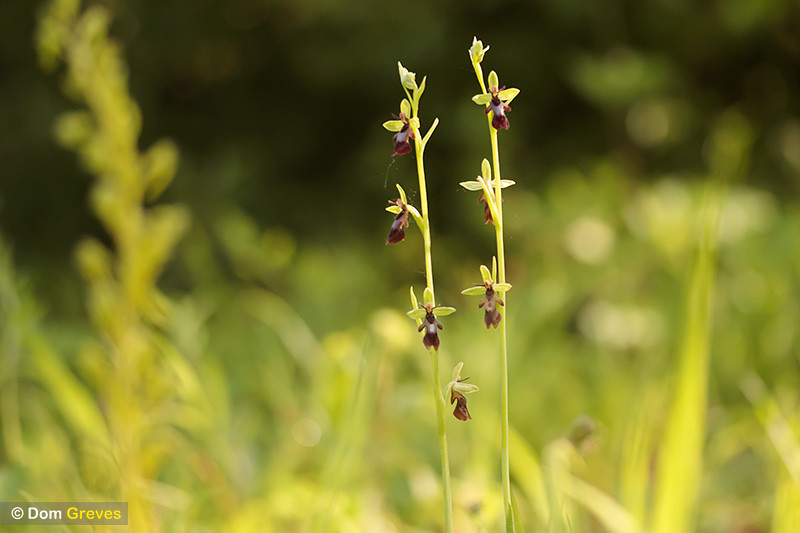 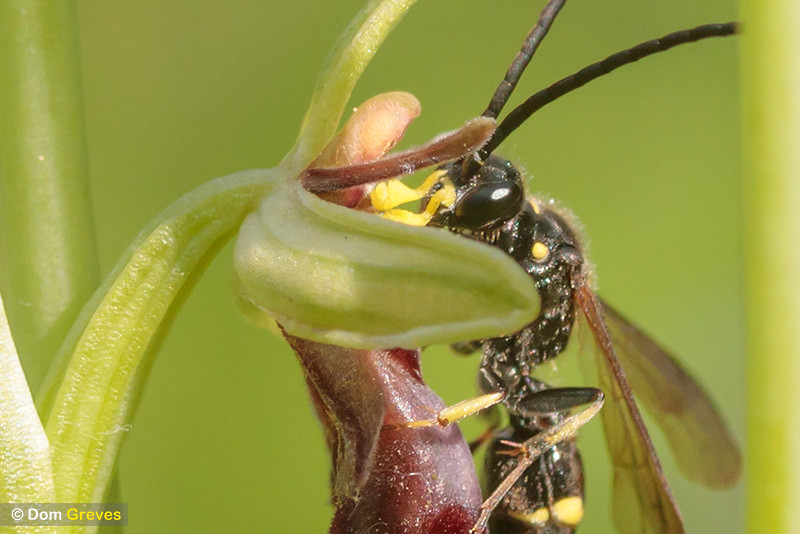 For a few months now I’ve been experimenting with the (non-commercial) use of a small camera drone for environmental monitoring. The quality of the resulting images and the unique perspective it offers have been pleasantly surprising. Its potential applications at relatively low cost are impressive I think.

The site of this Scheduled Ancient Monument lies east of the A3 in Surrey and just north of Junction 10 on the M25 motorway.

In late 2017 Surrey County Council, in collaboration with Surrey Wildlife Trust, decided that this Site of Special Scientific Interest (SSSI) would be a suitable venue to pilot their commercial felling operations in the county.

A felling licence issued by the Forestry Commission permitted them to extract 30% on 2 occasions over a 10 year period. Upon visiting the site however the impact at ground level looked far more extensive than I would have expected.

Concerned that contractors may have exceeded their remit and damaged the Scheduled Ancient Monument in the process I mapped an area to the north of the site, flying the drone in parallel lines at a height of 60 metres with the downward-facing camera set to take pictures at intervals every few seconds.

With the help of DroneDeploy’s internet cloud software I then stitched the resulting 139 overlapping images together to create an orthomosaic map layer.

Tracks left by the contractor’s heavy machinery can be seen running across the circular ‘henge-like’ earth bank feature.

To help peopIe unfamiliar with the site to visualise the monument in context I then generated a 3D model from the visual point data using DroneDeploy’s online competitor, Pix4D.

For terrain features and dense canopy this technique works well, but it struggles to accurately represent isolated trees and finer features. Without resorting to an expensive aerial LiDAR platform it would be difficult to achieve better results however.

The little drone done good on this occasion, and with minimal disturbance to this historically and environmentally sensitive site ironically.

After emerging from hibernation in early spring, toads migrate back to their breeding ponds.

Males fight to secure mates and often outnumber the females at some sites. When this happens the female may be grasped by several males in a position known as ‘amplexus’, as they compete to be in the best position to fertilise her eggs.

Group of toads in amplexus

Spawning might look fun but can also be life-threatening!

The common toad is widespread in Surrey, however populations appear to be declining. Where toad migration routes cross busy roads there can be many fatalities, and local conservation groups police ‘Toad Crossings’ at dusk to help them safely across.

This toad was late to the party, but managed to avoid oncoming traffic

Last week I joined Surrey Wildlife Trust on a harvest mouse survey in wetland habitat beside the River Wey.

Harvest mice are tiny rodents 5cm in length. Their remarkable prehensile tails add an extra 6cm. They live in long tussocky grassland, reedbeds, hedgerows and around woodland edges, building a spherical nest of tightly woven grass, high up amongst the stems. We found several examples at this site:

Nests are the most obvious sign of harvest mouse activity since the animals are especially active around dawn and dusk and rarely spotted in the thick vegetation.

Dozens of rodent-friendly traps of different designs were set in the thick wetland reeds and grasses. Surrey Wildlife Trust staff and volunteers returned three times each day over the course of a week – at dawn, midday and dusk – to ensure that no trapped animals were left for any longer than necessary.

After retrieval from the trap harvest mice are transferred to a transparent bag for weighing and sexing:

Once the details of each rodent have been recorded a small patch of fur is trimmed to identify any animals which are subsequently re-captured.

The highest number of individuals captured was 12 one morning, making this the most abundant site for harvest mice in the county at present.

With thanks to Surrey Wildlife Trust staff and volunteers.

We encountered another variety of sand digger wasp on the heath recently – this time Ammophila sabulosa, which uses caterpillars to feed its larvae.

Similarly to the spider-hunting wasp (Anoplius viaticus) it paralyses its victim with venom from its sting and buries it in a nest burrow. The caterpillar remains paralysed until the wasp larvae hatch out and eat it alive!

The entire nest cycle from site location, through excavation and provisioning, to finally sealing the burrow, takes 8-10 hours to complete.

Many wasps have ingenious parasitic strategies, as these earlier blog posts illustrate:

The puss moth caterpillar’s ‘eyes’ are only for display

A colleague working for Surrey Wildlife Trust kindly guided me to the location of this wonderful puss moth caterpillar (Cerura vinula) yesterday. A pair of them were contentedly grazing on aspen leaves.

In adult form the furry grey and white moth flies at night between the months of May and July. The larval form looks much more exotic. The gawdy pink ring around its face gives the puss moth a very distinctive appearance.

If disturbed the puss moth caterpillar extends two whip-like appendages from its tail end and flails them around to deter attackers. It’s a bizarre and unexpected thing to witness.

It also has the ability to squirt formic acid from its thorax if further provoked, but I didn’t try that!

Shortly before pupation the caterpillar will change to a fetching shade of orange, and then again to purple.

It spins a cocoon of silk around itself and uses bits of tree bark as camouflage to stay hidden for the winter. The resulting cocoon is one of the strongest constructed by any UK moth.

I will have to return to see if I can find it in its various rainbow stages of development.

Butterfly Conservation used my image of a nocturnal moth trapping event to illustrate their latest report:

Unsurprisingly the report concludes that UK moth numbers are in decline, documenting a 40% drop in total abundance in the south of England over the last 40 years.

On the bright side many more moth species have colonised Britain in recent decades than have become extinct.

This photograph was taken at a recent moth trapping event on Chatley Heath organised by Surrey Wildlife Trust. The original image below: 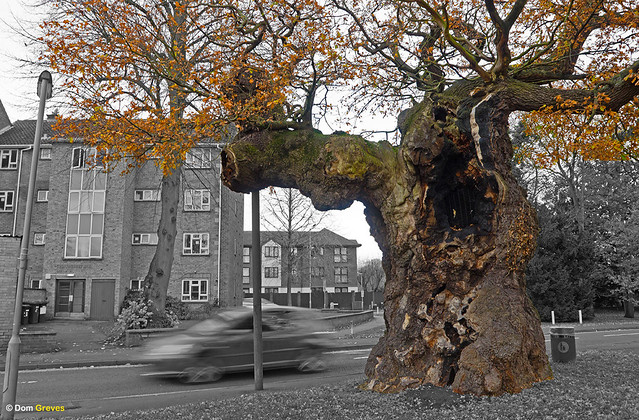 The Crouch Oak once marked the perimeter of Windsor Great Park and is thought to date from the 11th Century, making it in excess of 900 years old.

This ancient tree now looks a little incongruous as a modern residential estate has grown up around it.

The Crouch Oak at night with passing traffic

It’s interesting to compare depictions of this tree from the 19th Century and in 1904 as wooden fences are replaced with metal railings and a dusty track becomes a surfaced road. The oak also enjoyed an additional limb in those days.

In more recent times the Crouch Oak survived an arson attempt in 2007 and is now fitted with metal grilles across its hollow openings to prevent a repeat.

To see the Crouch Oak for yourself follow the map below to the bend in Crouch Oak Lane:

In the severe winter of 1962/63 the Dartford warbler (Sylvia undata) was almost wiped out in Britain. The national population dropped to just 10 pairs.

But in good breeding seasons, and with suitable habitat, its numbers are capable of bouncing back, thanks to repeated nesting and high survival rates among its offspring.

On the Surrey lowland heaths Dartfords have been doing well, re-colonising Thursley Common last year for the first time since a devastating fire in 2006.

During the recent freezing winter weather I photographed this Dartford warbler foraging in the snow on Chobham Common:

What kind of crazy folk go out at night and gather round bright lights in the expectation of winged visitors? Stoned party-goers after a particularly heavy session? Die-hard pagan worshippers perhaps? And moth trappers obviously.

It was my delight both to participate in and bear witness to this strange spectacle on an evening with the Surrey Wildlife Trust and assembled experts on Chatley Heath in Surrey last month. It began innocuously enough with a barbecue meal and mildly alcoholic beverage, but then the great orb in the sky descended, the darkness gathered, and things began to get weird.

A white sheet stapled to the side of Chatley Semaphore Tower and illuminated with fluorescent light set the stage for our distinguished guests to arrive, and it wasn’t long before the lure of this burning beacon drew them in.

At which point all pretence of ceremony evaporated and a man with net in hand, a wild gleam in his eye, pounced with the irresistible speed of a coiled spring released!

Once netted, the moth in question was transferred to an improvised lab bench nearby for inspection, ID and recording.

Steadily a queue of nocturnal visitors grew, each enclosed in a cylindrical plastic cell, and each requiring identification. A few of the larger, more striking moths, were familiar to the interested observer, but – to all except the most dedicated experts present – the majority remained strange and new.

Moth trap jars with inmates, including the yellow brimstone moth

There are roughly 800 species of ‘macro moth’ in the UK. These are the species you will find illustrated in standard field guides on the subject. But there have been 2,400 species of moth recorded in the UK when ‘micro moths’ are accounted for, and only the high priests of this cult can read the runes of their colouring and patternation with any degree of certainty.

On this particular night 73 separate species of moth were recorded – the list of outlandish guests including:

Elsewhere on the heath nearby an even brighter beacon was being kindled: a Skinner Trap, fitted with a blinding electric bulb powered by its own noisy generator.

Not only is this contraption very effective at attracting moths, it’s also remarkably photogenic! A portal to another world appears to have opened up on the heath at night. And for all those present at this special event, it undoubtedly had.

Nobody knows precisely why these creatures of the night are attracted to bright lights amidst the darkness, but it’s fortunate for us that they are.

With thanks to SWT Ranger Gemma.